Why have one stadium when you can have two? Unlike most clubs, Yokohama F.Marinos split their home matches between two separate stadiums: Nissan Stadium and Nippatsu Mitsuzawa stadium. Based roughly 5km apart, both arenas are used over the course of the season, with the Nissan Stadium hosting the lion’s share of matches. Here’s our guide to each stadium and what you can expect when taking in a match at either ground!

Nissan Stadium is located in Shin-Yokohama, within walking distance of both Shin-Yokohama and Kozukue station. The arena seats just over 72,000 people making it the largest sports stadium in Japan. Built for the 2002 World Cup in Japan and Korea, the Nissan stadium has also played host to the FIFA Club World Cup Championship Final on several occasions and is regularly used by the Japanese men’s national team for their home fixtures.

In recent years, F.Marinos have played friendlies against several European clubs here, defeating both Celtic FC and Manchester United in front of sizeable crowds. In the 2013 season, F.Marinos broke J-League attendance records in the home game against Albirex Niigata. With a victory guaranteeing the title with a game to spare, 62,632 F.Marinos fans packed in to the stadium only to see their side lose 2-0 and throw away their chance to create history. 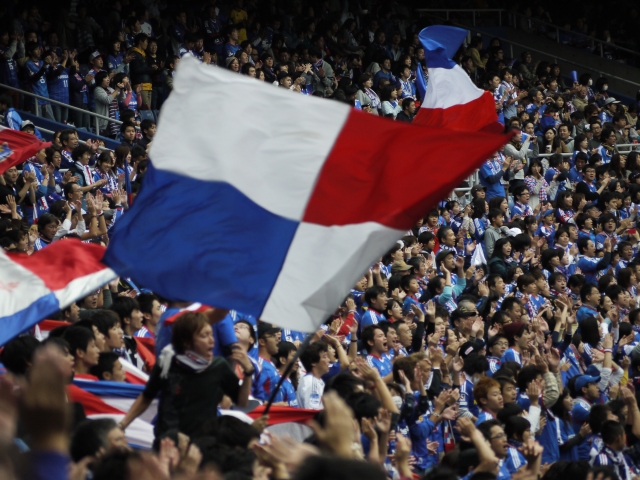 Crowds at Nissan Stadium averaged out at just over 27,00 in the 2013 season, and with just over a third of the stadium filled, you could be excused for believing the stadium is void of atmosphere. However, if you position yourself correctly (behind the goal, to be precise) you can find yourself in the middle of a small-scale ‘rampage’. With the Ultra group leaders rallying fans into a frenzy, matches at Nissan Stadium are always colourful and rarely dull.

Looking to blend in at Nissan Stadium? Be sure to arm yourself with an umbrella from the club shop! Fans unleash their ‘Toripara’ at the end of each victory! 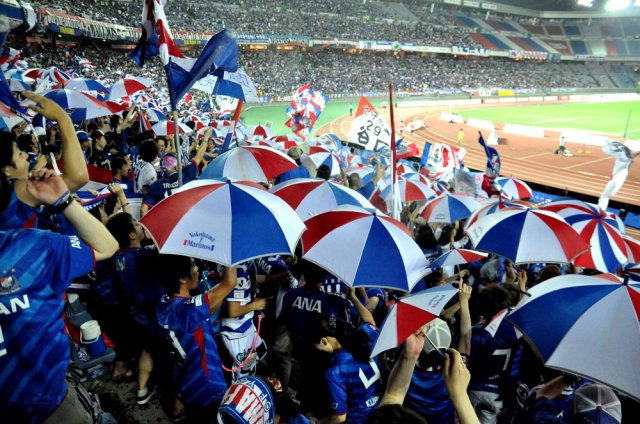 Buying Tickets at the Nissan Stadium On Match day tickets can be purchased at the ticket office at the bottom of the steps in front of the East Exit (See Map) for the games at Nissan Stadium. The tickets that allow you to sit behind the home goal are the cheapest and, again, also the seats with the best atmosphere in the stadium.

To buy these tickets, please ask for “Home Jiyu seki” (Home non-reserved seats), then head up to the North gate to enter the stadium. Home Jiyu seki is both tiers behind the goal and you are free to sit anywhere up to the pitch entrance tunnels in both corners.

Re-entry is permitted at Nissan stadium, provided you leave and re-enter through the ‘Sainyujo’ gate (read as 再入場 in Japanese) where you will have your hand stamped with an Ultra-violet stamp. Just wave your hand against the blue light upon your return and you will be readmitted. The sainyujo gate is situated at the East exit.

Due to Nissan Stadium’s large capacity tickets rarely sell out, though games against large well supported teams will occasionally lead to the area behind the goal becoming fairly crowded so it can be advisable to arrive early to get a decent seat.

Yokohama F.Marinos also use a secondary stadium, Nippatsu Mitsuzawa, for most of their mid-week fixtures and also the very occasional weekend game. Favoured by many F.Marinos fans due to it’s ‘old fashioned’ style, Mitsuzawa is considerably smaller than the Nissan Stadium with a capacity of just 15,046.

Inherited in 1999, Nippatsu Mitsuzawa is shared with local rivals Yokohama F.C. who play all home league matches in the ground. Games at Mitsuzawa are a much more intimate affair as there is no running track around the perimeter of the pitch, (a common feature at Japanese Stadiums) which brings you closer to the action and always makes for a great atmosphere.

The downside to the small capacity is that tickets for these games sell-out rather quickly so its best to plan in advance if you wish to make the trip to Mitsuzawa Stadium.

Looking to blend in at Nippatsu Mitsuzawa? You’ll have to do two things: check out our supporters’ songs page to brush up on your chants and make sure you bring some honey for your throat… you’ll need it!

Tickets can be bought on matchday at the ticket box opposite the entrance (on the corner by the tennis courts) and also before matchday at the Tricolore One store in Minato Mirai. Nippatsu Mitsuzawa stadium has a capacity of just over 15,000 and tickets often sell out. We strongly recommend that you keep an eye on the schedule and purchase your tickets as soon as you can to avoid disappointment.

The following ticket pricing structure is a little outdated with 2014 prices yet to be released, but serves as a rough guide to what you can expect to pay at the Nissan Stadium.